Having recently moved in to a new home, Crissy had been looking to personalize the space with artwork. A visit to a local thrift shop netted her two original works on paper that worked well together – a large pen and ink illustration and a smaller oil pastel sketch, both rendered in black media and featuring heritage buildings. However, in addition to being outdated in style, the frames that housed each image were causing damage to the artwork.

“I’ve been working at Opus for several years and understand the value of framing an image, both in terms of presentation and protection. I have several prints from local artists and some of my own photographs framed in our readymade frames, but I had never tried our Custom Framing service. These drawings offered the perfect opportunity to do so.”

Custom Framing “the Opus way” offers the chance to be hands-on in the process of framing work, and this self-directed style of framing can cost about half of what you would pay for full-service custom framing. Crissy brought both pieces to the framing department at Opus to try it firsthand.

The smaller of the two works had a label on the back that indicated it had been professionally framed perhaps a half century ago. The frame was too small for the size of the work it held, leaving it tightly cropped in the frame with little space around the image. While the wood frame that surrounded the large illustration lacked the visual presence the work deserved, the most noticeable issue affecting the piece was the wood pulp mats. Over time, the acid in the mats had discoloured their white core, changing to yellow. Worse, that acid had also damaged the artwork where the mat touched the paper, marking it with a halo of dark amber.

Opus staff set Crissy up at one of their framing tables with a selection of mat samples. Having seen firsthand the damage an inexpensive wood pulp mat can do to paper, Crissy chose 100% cotton matting – a naturally acid-free option. She created a double mat, combining a warm white cotton mat with black cotton fillet (the slim decorative strip between the mat and the image) to provide definition and to echo the line work in the drawings.

With the assistance of Opus staff, she measured the mat opening that would surround the larger illustration and found a size that covered the discoloured edges while still allowing a nice amount of white space around the image. The smaller sketch had a drawn, black border and she chose to bring the black fillet right to its edge “to create a visual window into the scene.” She then decided how wide the mats would be, which determined the size of the glass, backing, and frame that would surround each piece.

Crissy wanted the two frames to have a combination of differences and similarities, as the two images did. Browsing the selection of hundreds of frame corner samples, a scooped profile that featured a dental moulding detail was chosen for the large illustration, perfectly complementing the architectural subject. For the smaller sketch, a brown-black scoop moulding, slightly distressed to reveal a hint of golden wood detailing similar in tone to the drawing’s background, was chosen. 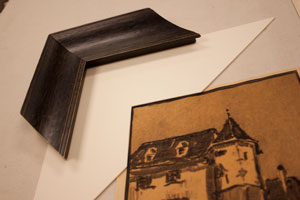 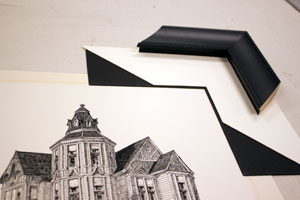 Opus staff were there to assist as needed. “I loved the process! Choosing what I felt was just the right frame to bring out the best in both images, but also treating them like a pair was a lot of fun for me. I normally take forever to make a decision but it all went pretty quickly. I send a big thanks to the framing staff that helped me get it right.”

With Crissy’s choices made and her order placed, she was on her way; the frame shells, mats, glass and backings would all be ready for her to pick up in about a week. “When I came back to the store to pick up my order, it was almost like a kit – the mouldings I picked out were now frames and I had everything I needed to secure the glass, mat, and backing into them. They offered that I could assemble the artwork into my new frames at one of their framing tables,” says Crissy. As she didn’t have the artwork with her, staff helped her select a hanging hook designed to hold the weight of the frames and gave her simple instructions on how to put everything together at home. The only tools needed were a screwdriver and a hammer. 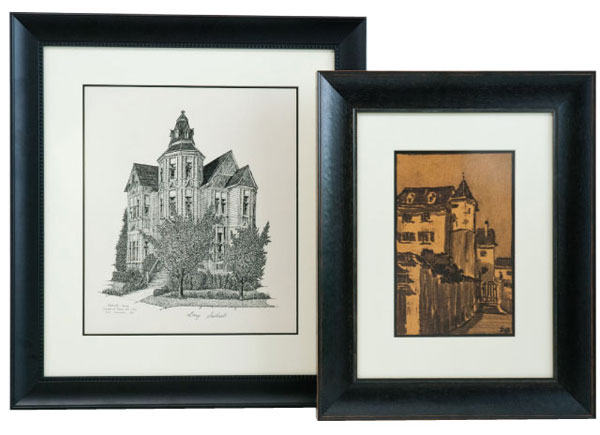 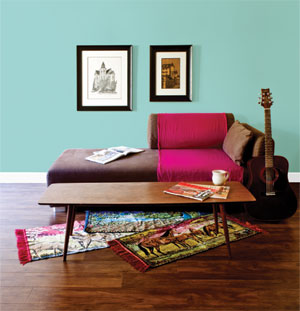 “In less than an hour, I assembled the ‘frame sandwiches’ and the work was hanging on my wall,” she said. “It’s kind of silly, but I love how great they look now and that I had a hand in that. Now, what else can I frame?” she laughs.•