Over the years GOLDEN have seen increasing interest in matte paints, especially those thin enough to create a smooth, brushstroke-free finish. While they have had a few matte paint lines in the past, none of these truly matched the performance properties that were desired by artists. Thus GOLDEN set out to make a better matte paint. This paint needed to be as matte as possible, as opaque as they could achieve, all with excellent flow and levelling.

A main challenge in formulating this paint was the competing attributes of opacity and leveling. To achieve opacity, the formula needs a high level of solids, preferably solids that are inherently opaque. Higher solids generally lead to higher viscosities, and thus reduced flow. The property of leveling, however, requires a relatively significant amount of carrier, in this case, water, so that the viscosity is low enough to allow for flow and loss of tool marks. This higher water level, of course, reduces loading of solids to achieve opacity. One means of formulating around this contradiction is by selecting the best rheological modifiers for the formulation. Rheology modifiers are thickeners and/or flow improving agents. Through many trials and combinations of different modifiers, they were able to reach a formulation that has high solids for opacity, while being stable and leveling well. 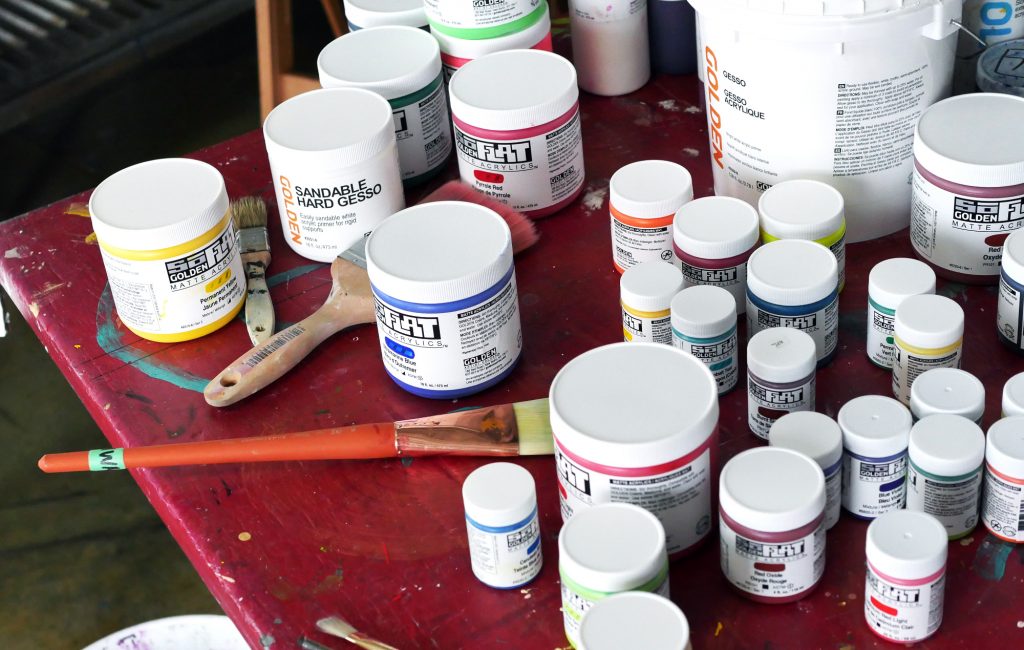 A final method to optimize opacity was to add in Titanium White when they felt it was necessary and acceptable in colour. GOLDEN only turned to this when they were unable to achieve opacity through pigment selection and optimization, and when they felt it did not interfere with the colour quality they were trying to deliver. An example would be the Fluorescent colours, where the colour is based on a dye, which is inherently transparent, but high levels of Titanium White in such would eliminate not only the brilliance of the Fluorescent colours, but also would dramatically reduce their glow under black light. For any colour containing Titanium White, PW6 is listed on the label to be sure customers are aware. 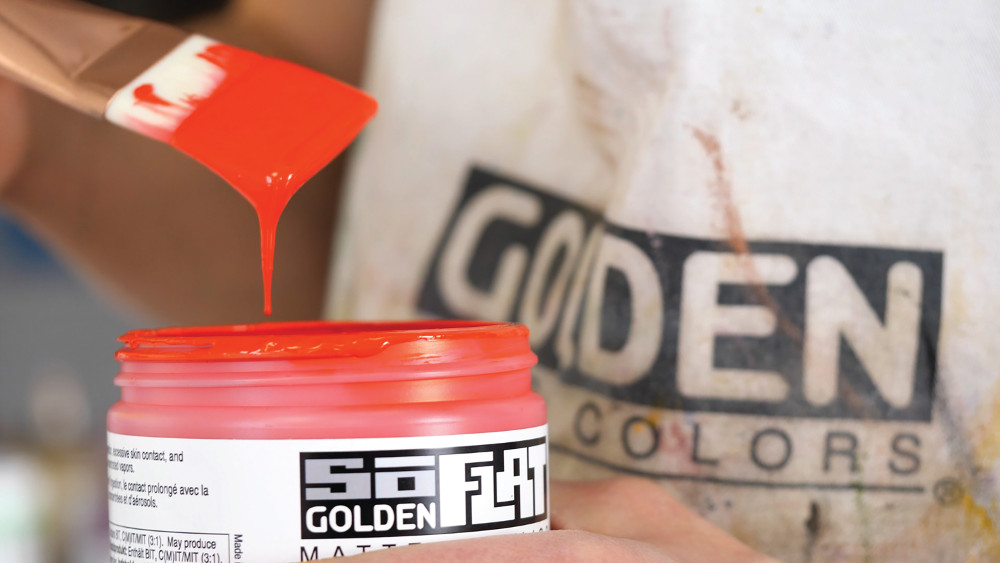 The selection of the binder was also a critical part of the development process. This binder had to be able to handle the high levels of pigment and matting agents, while providing a stable formulation that has a long shelf life. In addition, the binder needed to deliver flexibility to the heavily loaded paint film, and of course allow for the low gloss desired. Binders themselves are inherently glossy, and range in film properties from being hard and brittle, to being soft and sticky. Through many trials, GOLDEN was able to achieve an opaque matte film, but with a modest level of film flexibility. SoFlat is certainly not as flexible as the standard Heavy Body and Fluid Acrylics, which is why they recommend applying them thinly, to avoid thick films that may tend to crack during drying or after dry.

While maximizing pigment load for opacity was critical, the low gloss required the use of matting agents as additional solids. High pigment loads will reduce the gloss a bit, but are not going to independently yield a low gloss film. Thus the pigments and matting agents are competing for space in the formulation. Investigating many matting agents, GOLDEN focused on finding those which were very effective at reducing gloss while not absorbing a significant amount of water or binder. 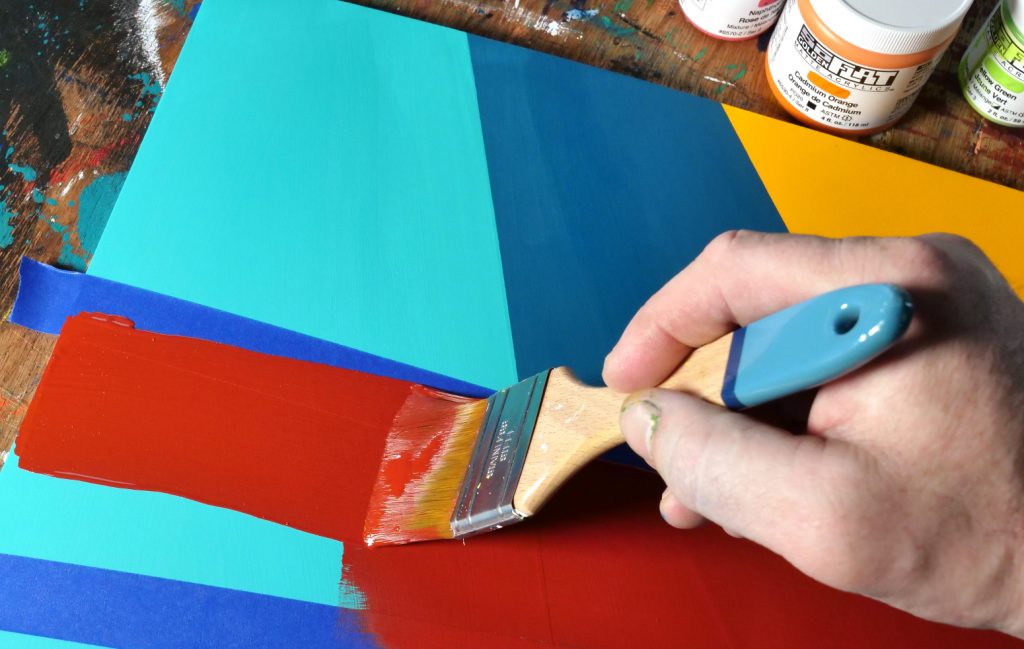 The packing of a high level of pigments and matting agents into the formula requires having enough surfactants to effectively wet out the surfaces of these solids. Surfactants are like soaps, with a portion that is attracted to the pigment/solid surface and another that likes to be in water. Without a sufficient amount, the paint can become unstable and cause the solids to flocculate, which is generally seen as a significant increase in viscosity. On the other hand, higher levels of surfactant can promote foam or air entrapment in the paint film, as well as increased water sensitivity. To test shelf stability, GOLDEN checked the impact of five freeze/thaw cycles as well as four weeks in a Lab test oven at 140°F. This struggle and optimization is always a critical part of the R&D time, as they take pride in GOLDEN paints having both maximized solids and a long shelf life. 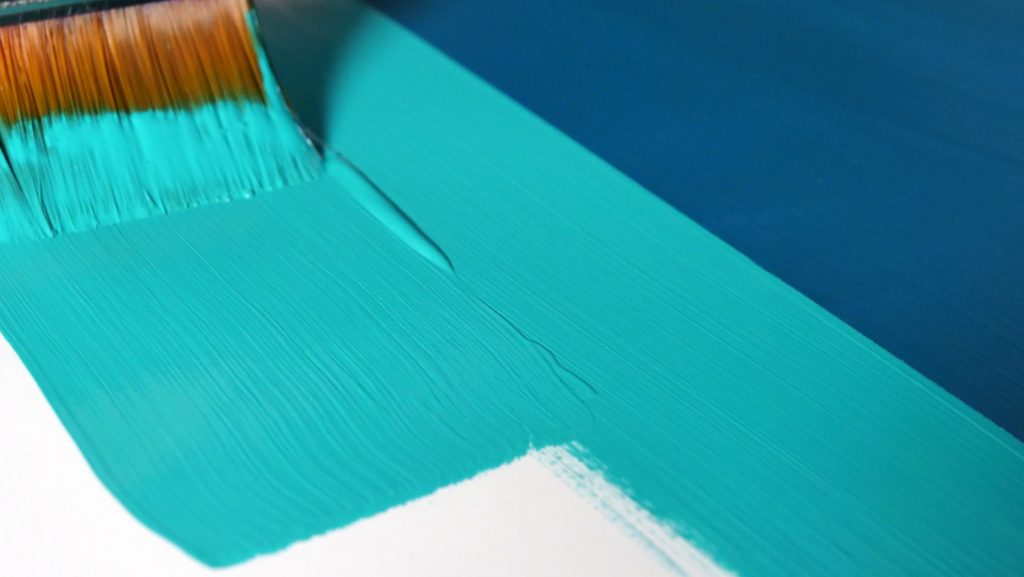 I mentioned earlier the need for rheology modifiers to build the proper viscosity and leveling quality. When working with these, another critical balance is between the flow/leveling qualities and the paint stability. Generally a paint that levels well will tend to have pigment settling issues, as well as the formation of a liquid layer on the surface. They went through many trials to create a paint that levels well with minimal pigment settling and separation. While the SoFlat paints will require some level of remixing before use, as they were not able to eliminate separation completely, there should be minimal to no pigment settling on the bottom of containers.

In summary, the R&D team worked diligently over several years to fine tune the SoFlat paint formulation, overcoming these many competing properties, to offer artists a truly unique matte paint system. Now GOLDEN is eager to see where and how artists push this paint, and to see the results in art that will shine with colour… just not reflectance/gloss. 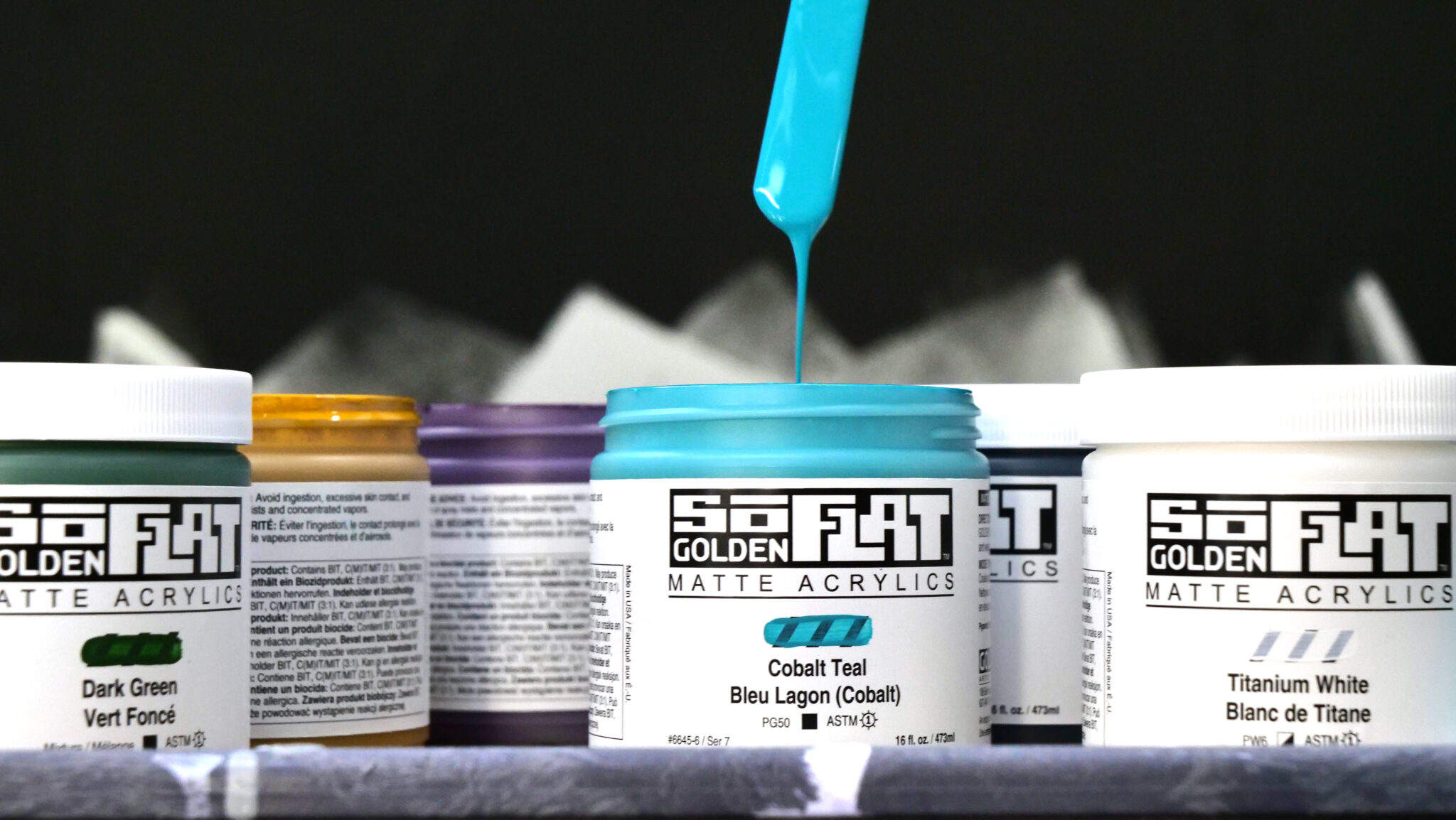