Ultramarine is a colour that has appealed to people’s imagination since the early Middle Ages. These days it is impossible to imagine the standard palette without this intense blue with its excellent lightfastness. However, up until 1828 only the natural variant was available. An expensive affair, all the more so since this pigment cost more than pure gold. 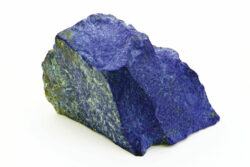 Originally Ultramarine was obtained from the semi-precious stone Lapis Lazuli, literally ‘stone’ (Latin) and ‘blue’ (Persian). An extraordinarily laborious and expensive process, whereby the stones are ground by hand and all the impurities are removed. The best quality Lapis Lazuli was traditionally mined in Afghanistan, where Ultramarine was already being used in, for example, murals in the 6th and 7th centuries. 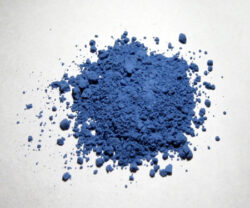 In the beginning of the thirteenth century a method was developed that allowed an even purer pigment to be obtained from the stone. This resulted in a considerable decrease in profit per stone, and an unprecedented increase in price which even exceeded that of pure gold. Nevertheless, artists were so impressed with the colour intensity and lightfastness that the demand only increased. Also in Western Europe, which since the 14th century received ever larger quantities of Lapis Lazuli shipped from overseas. And this in fact is how Ultramarine derived its name, ‘ultra marum’, Latin for ‘beyond the sea’. Due to the high price, however, the pigment was by no means part of artists’ standard range of colours. What’s more, we know that artists such as the Dutch 17th century masters charged their clients for the extra cost of Ultramarine.

During the Industrial Revolution when the science of chemistry was on the rise, an affordable alternative for the extremely expensive Ultramarine was sought. In 1824 a competition was held in France for the creation of a less expensive, synthetic variant that still had to retain the same quality. The prize: 6000 francs. In those days that was a fortune. In 1828 three chemists, Guimet, Gmelin and Köttig, developed independently from one another a practically identical method of preparation. Guimet ultimately won the competition as he had already been working on his discovery in secret for some years. 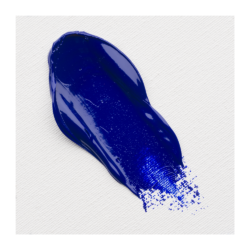 In terms of properties Guimet’s synthetic Ultramarine hardly differs from its natural counterpart. Both, for example, are highly susceptible to ‘Ultramarine disease’, whereby humidity in combination with acids causes the colours to fade. However, in the course of the years the quality has greatly improved and external factors now hardly affect the colour intensity. What’s more, Royal Talens adds an ingredient to its Ultramarine oil colours that makes the colour totally ‘immune’ to the ‘Ultramarine disease’. All the more reason for the now affordable ‘blue gold’ to be on the standard palette of almost every artist.

Ultramarine is a blue pigment with ‘traces of red’. Mixed with bluish reds it offers numerous possibilities for creating surprising shades of violet. In addition, Ultramarine is often used as a transparent layer in the glazing technique. If applied thinly on a white ground or by mixing it with a little white paint, the characteristic, intense, clear blue colour is created.

This article was shared with the permission of our friends at Royal Talens.