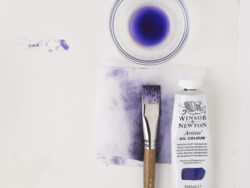 Winsor Violet (Dioxazine), made from PV23 (Pigment Violet 23), is a vivid purple pigment introduced into the Winsor & Newton range in the 1960s. Its strong mass tone is almost black and when diluted this colour reveals a paler soft violet. It is an incredible colour and one of the bluest shades of violet.

Violet falls between red and blue in an artist’s colour wheel and is placed after indigo on Isaac Newton’s 7 colour rainbow spectrum (ROYGBIV: Red, Orange, Yellow, Green, Blue, Indigo, Violet). Violet sits on the very edge of the visible rainbow spectrum after which we find Ultraviolet (or ‘beyond’ violet from the Latin ‘ultra’) which is invisible to most humans but can be seen by some insects and birds. For example, butterflies use Ultraviolet signals as a communication system for nectar guides and mating. Perhaps because of our inability to visibly perceive beyond violet, it is sometimes the colour that represents the fringe or the edge of knowledge.

Violet is closely associated with purple and the history is a fascinating one that begins in Tyre, Lebanon with the legendary story of Heracles, the philosopher. It is said that Heracles was walking with his dog on the beach in Tyre when he noticed a purple stain on his dog’s mouth. It transpires this purple had come from the Murex sea snail which secretes a purple dye. After this discovery, Tyrian Purple became a dye used to colour ceremonial robes. It didn’t fade easily and took thousands of snails to dye just one garment, so it was very expensive – not to mention time consuming – to produce and became known as a colour of luxury and power. 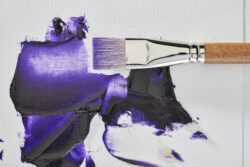 Later in this colour story, in 1856, a new purple would be found, again accidentally, this time by William Henry Perkins at the young age of 18. Perkins had a makeshift laboratory in the attic of his family home where he was searching for a synthetic form of quinine for the treatment of malaria. One day he noticed a by-product of his experiments that produced an intense purple, and the colour Mauve, a pale tone of violet, was invented. Perkins went on to set up a very lucrative business of synthetic purple dye for clothes, which previously had been only possible with expensive natural dyes. Perkins’ discovery at the start of the Industrial Revolution opened the floodgates to many other synthetic colours.

The word Violet as a colour comes from the French ‘Violete’ and Latin ‘Viola’, which are names for the violet species of flower. It was very popular as a female name in 1900 and has recently picked up popularity again, with variations Violette, Violetta, Viola. Violet is also the colour strongly connected to Impressionism, with Monet, Pissarro and Manet abandoning the use of black for shadows and instead using tones of violet, seeing in shadows shades of colour rather than black or grey. This led to violet being dominant in their paintings and they were dubbed as having ‘Violettomania’. With Monet declaring “I have finally discovered the true colour of the atmosphere,” . . . “It is violet. Fresh air is violet.”

Winsor Violet (Dioxazine) is available in the Artists Oil Colour range as well as in Designer’s Gouache, Professional Watercolour and Galeria Acrylic Colour.