Our Oh Canada Virtual Art Tour has ended. What an epic, seven-week adventure! From Faces to Food, Landscapes to Landmarks, we travelled coast to coast, finishing back where we set off in Old Hazelton, at the heart of Gitxsan territory. At the start of our travels we wrote about a unique mural project called The Return. You can hear more from Leah Pipe, Roy Henry Vickers and Michelle Stoney in the second Opus Creative Lives podcast, exploring how artists heal and move societies forward; their stories of the past and hopes for the future echo across Canada, touching on sentiments mirrored by many of your submissions in our online gallery.

Throughout this expansive endeavour, narrowing down a selection of images and stories has been an extremely difficult task. The final theme of Cultures of Canada is no exception. It’s been a fascinating exploration, delving into some of the different heritages which make up our country. 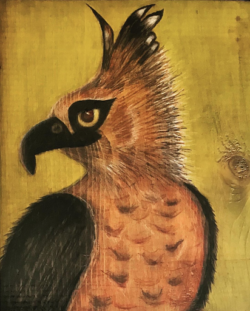 Being one-quarter Indonesian (and three-quarters Dutch, born in The Netherlands), sometimes my art reflects my heritage. The Javan Hawk-Eagle is the national bird of Indonesia, commonly called Garuda after the bird-like creatures in Hindu and Buddhist myths. On the country’s flag, the Garuda holds a banner in its claws which reads ‘Bhinneka Tunggal Ika’. This is old Javanese for “Unity in Diversity”.

As one of the vast number of immigrants in this wonderful country, I believe that many of us are a culmination of our diverse backgrounds, learning about and respecting each other’s cultures. We are all the richer for it. 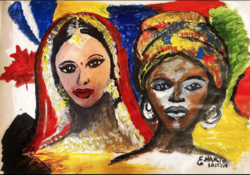 I always wanted to pay homage to my mixed culture. Born In Guyana and being mixed race was something I was always proud of. I am proud of being part black (Bajan- Barbados -Caribbean African descent ) and part East Indian and some Scottish, German mixed in as well. Finding out your heritage makes me understand so much more about the history of where I was born. Guyana is a great country made up of six different races and because of it, it is quite multicultural. It’s a blend of great food, people and cultures. I moved to Canada at the age of 13, so my childhood was in my birth country. British Columbia has been home ever since. I am so proud to call Canada home, a place where there is so much diversity, a melting pot of people. In this painting I wanted to capture some of my heritage and in the background I painted all the colours of the flags that are part of my heritage. 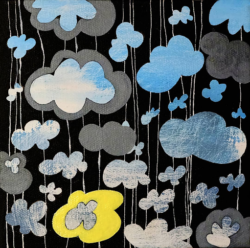 My Chinese name has a character which means cloud. Since I was little, I have always found it fascinating that whenever we look up, no matter which part of the world we are in, it’s still the same sky and possibly the same clouds that we are looking at. The yellow buttery popcorn is the first food in Canada that gave me ‘the wow’, as in Hong Kong, we only had sweet popcorn. 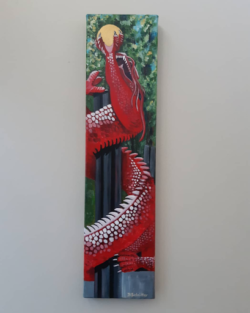 My great-grandmother was Chinese, married to a paymaster in the British Army and came to Vancouver Island from China with 10 children. Whenever I go to Victoria where my mother was raised, I am drawn to Chinatown. The Red Dragon statue at the entrance has always captured my attention which is why I felt compelled to paint it. 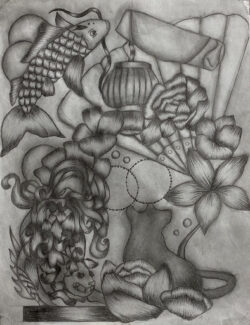 Hello! I’m Cindy and I’m thirteen. The drawing I made has some of the most significant things in my culture. The foo dog, koi fish and some food that is popularly eaten in Vietnam (spring rolls) plus some other things I think are beautiful, like the flowers, lantern, and fan in the background. The rat in the bottom right hand corner represents New Year, one of the most important events my culture celebrates. My younger sister has also submitted a piece! 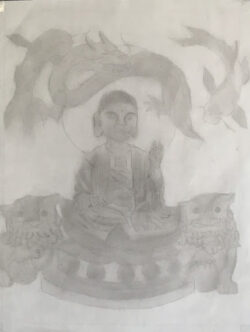 Hello! I’m Victoria. I am not a professional artist because I’m only 12 so I don’t have the best supplies. I remember going to Buddhist temples with my family and seeing the beautiful statues of Buddha, foo dogs, dragons, and more. We would pray for hours listening to monks speaking and telling stories. These were beautiful places, decorated with flowers and Tét (a Vietnamese festival) themed banners. There were people dressed as foo dogs entertaining the children and beautiful lights. I am blessed to have such an amazing culture and I love being born and living in such a diverse, welcoming and supporting country! 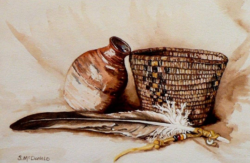 This is an image of my heritage – natural clay work, a woven Haida basket and a very special eagle feather. 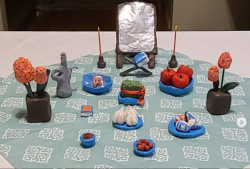 For centuries, Persians have gathered around Haft Seen annually to celebrate Noruz (new day), the first day of spring. I’ve made a miniature version of this tradition with homemade dough. Haft Seen is named after the seven objects on display, all starting with the letter seen (‘s’ in English). These are symbols of longevity and patience, healing and protection, light and hope, fresh and colorful nature and the sweetness and sourness of life. Gathering around Haft-seen reminds me of the value of human connection. I am grateful for it, especially during physical distancing in the era of Covid19. All over the world, everyone celebrates Noruz at exactly the same time. This makes me feel connected with millions of people. It’s as if there is an invisible yet strong rope keeping us all connected in a loop of love. I am grateful to live in Canada, a country where multiculturalism is valued and different cultures are respected. 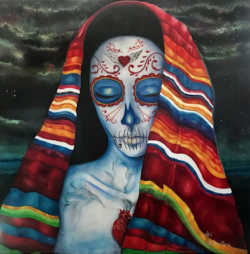 I used to believe that in order to belong to Canadian culture I had to put mine aside. Now I understand that owning my Mexican heritage with pride gives me a sense of belonging. Canada is full of bicultural people, immigrants (like me) and people whose generations have been in this land since the beginning. We the people are what makes this country beautiful. After traveling around the country, hiking its mountains (three different provinces), swimming in its lakes, trying different types of food, attending multicultural celebrations and, most importantly, being exposed to other beautiful cultures and people, I can now proudly call myself a Mexican Canadian whose voice is valued and has much to contribute to society. This is a painting of a Catrina (sugar skull lady) which is part of one of my most beloved ancient & cultural celebrations, “Día de los Muertos” (Day of the Dead). 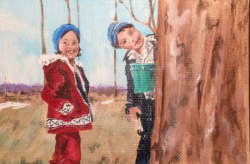 I come from a family of pie makers, grown on classical music and pow wows, horses, farming, and adventures in forests. Part Blackfoot, Swampy Cree, Irish, German, Seminole, and pinches of various other ancestry, I am Canadian. I am friendly, apologize for more than I ought to, and I love maple syrup.

We’d like to congratulate all our winners and thank everyone who’s travelled with us on this breathtaking voyage. Week after week, your artwork impressed and enlightened, spectacularly revealing the rich diversity of our nation as well as the unique spirit which bonds us together. Your participation is what made the journey so thrilling. It’s an excursion we’re immensely proud of and one which will remain immortalised in our online gallery. Thank you for sharing all your unique perspectives. Together, we’ve celebrated and explored Canada in the most magnificent way. Explore the incredible contributions to this tour on our gallery!