In the world of pigments there is history, consistency and refinement, and when fluorescent show up they make waves, they make themselves known. 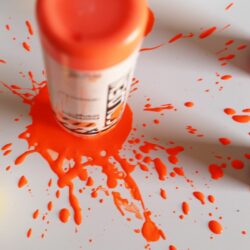 Fluorescent colours are valued for a brightness that standard pigments don’t possess. While, as their name suggests, they do fluoresce under a black light, it is often their high chroma that entices artists to utilize them as tools to emphasize, contradict and compare the other elements within the work without the use of specialized lighting.

The suggestion of excitement is an actual phenomenon, an effect ultraviolet light has on fluorescent colour. When ultraviolet light hits the colour it raises the energy of the electrons of the molecules to what is called an excited state. Once in this excited state, it does lose some energy to vibrations but the rest of the energy is emitted in longer visible glowing wavelengths. It is possible for these pigments to glow under light other than ultraviolet as long as the absorbed light has higher energy than what is emitted and the specific colour has the ability to absorb that particular colour of light. The ability they have to fluoresce under a black light creates a controllable and alternative avenue otherwise unrealized by the viewer and can act as a hidden secret.

“When ultraviolet light hits the colour it raises the energy of the electrons of the molecules to what is
called an excited state.”

The ASTM rates pigments for lightfastness so there exists a standard based on the chemical makeup of a pigment. Golden conforms to that testing and in addition, performs their own extensive research and testing of all of the pigments they carry regardless of whether or not the ASTM has rated the pigment. 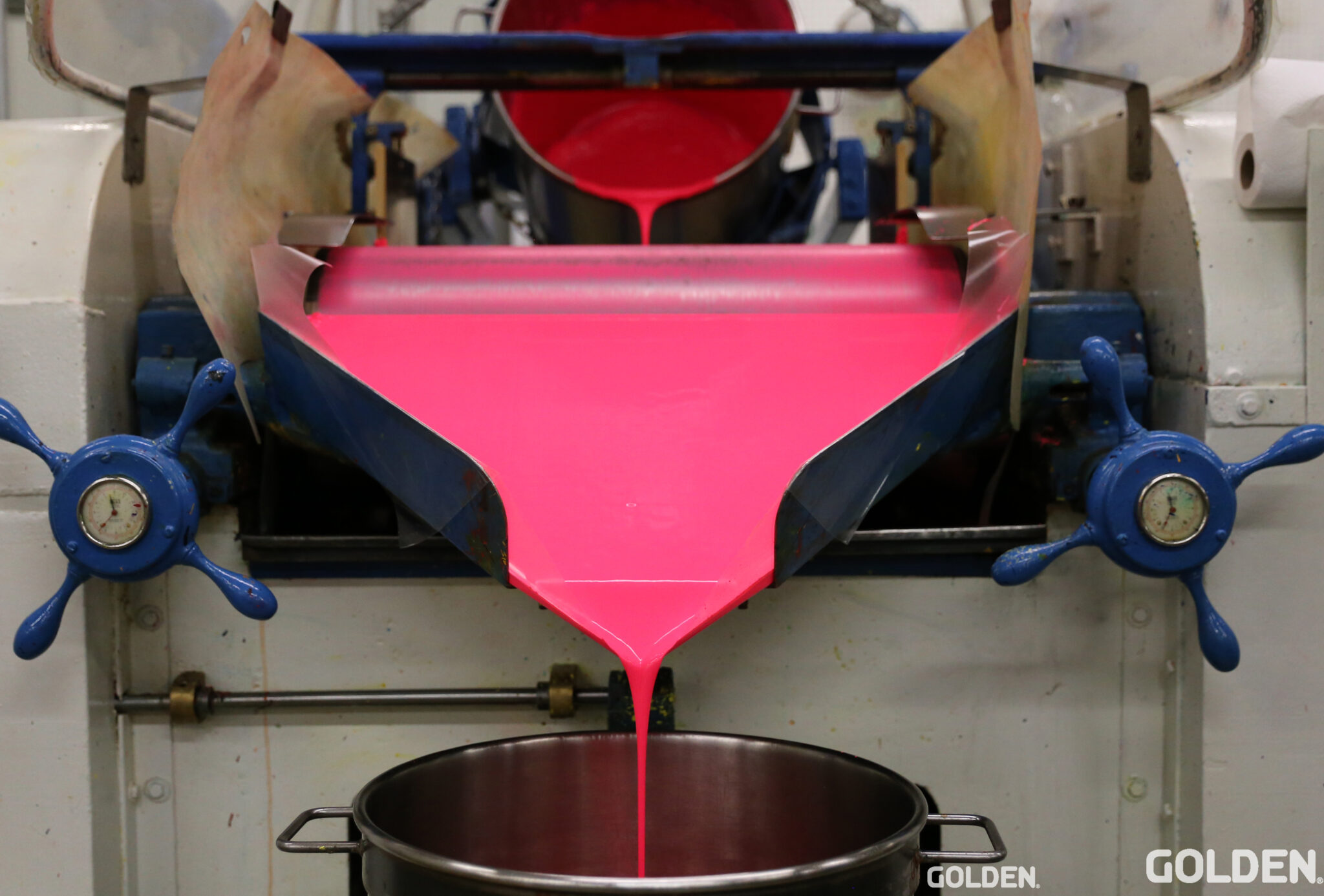 Fluorescents, in general, do not perform well in regards to lightfastness. Foremost, fluorescents are not pigments. The fluorescent colours they make are organic dye-based fluorescents that are dissolved in a transparent solid polymer carrier. In general, pigments are solid particles while dyes are fluids and overall, due to the physical structure the solid pigment has greater durability and less surface area exposed, resulting in greater lightfastness. 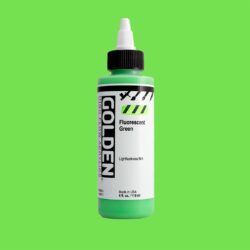 “One of our philosophies is to delight the customer.”

This may lead someone to ask why Golden carries colours that do not fall within their high standards of longevity. The simple answer is because artists have asked for it. One of their philosophies is to delight the customer. Golden has built a reputation on creating what the artist needs and base that on actual requests. What they offer despite poor lightfastness, is a product that is the best within its class. Golden also offers an accurate assessment of performance so that artists can make their own choices as to whether a particular material suits their needs.

When choosing colours to make into paint Golden examines all of the options available and looks at the colour in regards to its mass-tone, tint, opacity, durability, sensitivity, lightfastness and in this case, its ability to fluoresce.

When fluorescents fade they not only lose their power to fluoresce but they also lose their high chroma.

They do not all fade similarly nor do they fade to the same degree. When exposed to UV, Yellow goes green, orange goes more yellow and dull, pink goes to a light earthy orange colour, green goes very blue and dull, and blue goes much darker. They all get duller and either fade or shift. 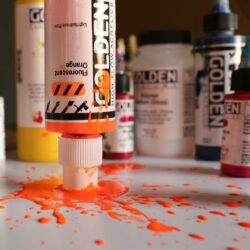 If the fluorescent colours are used for their fluorescing properties, then the thickness of the paint applied and what it is applied over top of will make a significant difference. They will behave differently over each colour. Over matte black (Black Gesso) the colour will almost be imperceptible due to its transparency with a single coat but as the number of coats is increased, the colour will emerge. When placed under a black light the background will completely disappear making the fluorescing colour the only visible element. When the fluorescent colour is painted over white, its initial colour is very bright as the white behind the transparent colour is helping by allowing more light to bounce off of the surface. However, as the coats increase and the opacity increases, less of the white shows through actually leading to a diminished glow in comparison to one coat over white. If an intensely bright fluorescing colour is desired over a matte black surface, it would be achieved best by starting with a matte black background and painting the areas to fluoresce in white prior to applying the fluorescent colour.

Transparency of fluorescent colours will require some finessing
if an opaque passage is desired.

Often choosing a similar opaque colour and applying it under the fluorescent colour will allow for far greater opacity without losing the chroma or intensity. They can also be mixed together, although the fluorescent colour can get lost within the strength of an artist’s pigmented paint colour. Stippling techniques used by decorative painters can also help break down the brush marks so that an even application can be achieved.

Varnishing can save your intensely high chromatic colours from fading and dulling to a colour that is unrecognizable to its younger self. When MSA Varnish and Polymer Varnish were applied to the fluorescent paints in one, two and three brush coats Golden saw minimal change in their exposure but they no longer fluoresced. They did fluoresce slightly at one coat of the varnish and just slightly under two coats of Polymer Varnish. At two coats of MSA Varnish, there was absolutely no fluorescing. The reason varnish works to not only save but hinder the fluorescent colours is because the varnish contains UVLS (Ultra Violet Light Stabilizers) which block UV light from entering through to the paint film. While varnish will save a painting from fading it will also prevent it from passing light from the source back to your eye. 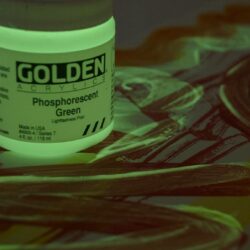 Phosphorescent Green is also available in a medium 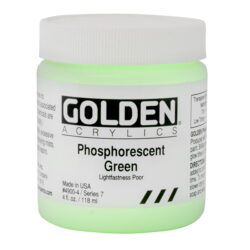 Article kindly shared with us by our friends at Golden